At the side of the alley, a blue Bajaj was parked, waiting for customers

I passed through an alleyway that was only slightly wider. The traffic on the not-so-wide road was unexpectedly heavy. There were only low-rise buildings in this area, and there were no sidewalks. The cars ran past me as I walk along the edge at a considerable speed.

After walking for a while, a lovely blue auto tricycle was parked. It was Bajaj. All the three-wheeled taxis driving around Jakarta's town seem to be blue in color, and you won't see a Bajaj painted any other color. The cars used to be all in orange, but when they were updated to a newer model, they all changed to blue.

This Bajaj was waiting for a customer and the driver was in the driver's seat, ready to leave at any time. But there didn't seem to be any customers. The older driver, wearing a cap, leaned out the car window, a little annoyed. He puffed his cigarette frequently, paying close attention to the direction his customers would come. 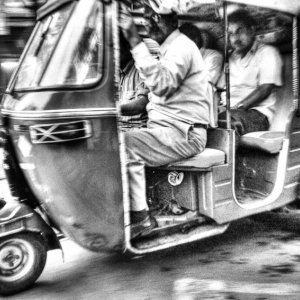